The Physiology of Your Erections

In this article we are going to look at the physiology of erections and ejaculation – not so much because of how interesting it is, but because it’s an important element of understanding how to perform better and last longer in bed.

Ultimately the cause of most men’s premature ejaculation (PE) is that they have a over-responsive nervous system. Now your nervous system can be divided into two parts:

Now this isn’t a medical classroom, so I’m just going to focus on what matters here, but it’s important that you have this basic framework of knowledge, so bare with me for a couple of more minutes. 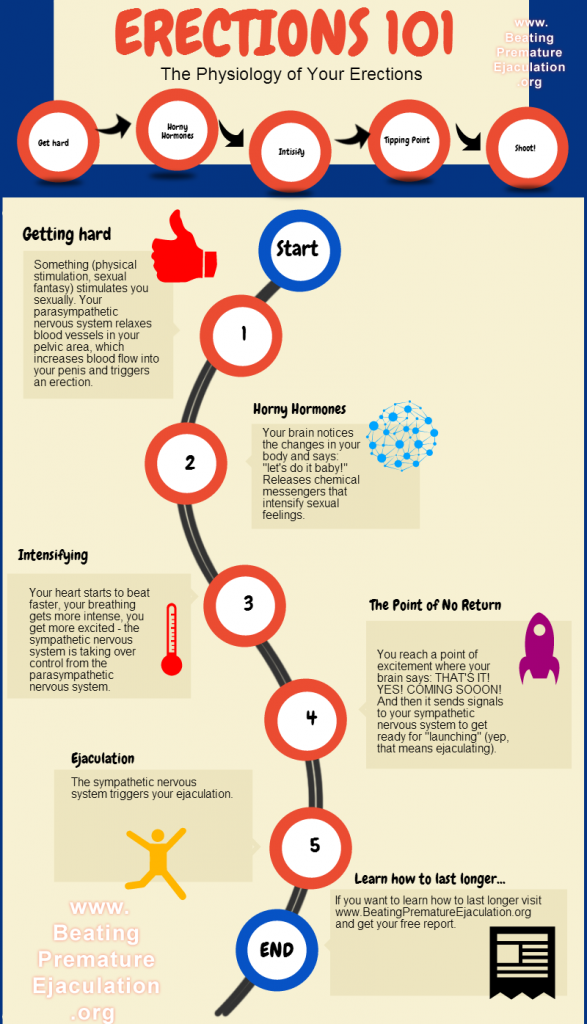 Your peripheral nervous system consists of two parts as well:

And now there’s one more “layer of knowledge”: the autonomic nervous system is divided into the

And these two are what really matter when it comes to having sex, male stamina and PE.

Before we go on, try to remember this:

You probably heard about the fight or flight response. This is the biological mechanism which is crucial to your survival, and it can override pretty much every other function in your brain.

So if your brain perceives something as a potential threat, the first thing it does is to go into defense mode and decide whether you should:

And it mobilizes all your energy and body systems to do that by basically switching everything else off, shutting all other systems down. That’s why it’s so hard to be reasonable or think straight when you are really, really upset about something.

Now remember what you just learned about your sympathetic and your parasympathetic nervous system?

The parasympathetic nervous system is all about relaxation. I imagine a stoner, laying in a hammock and saying: “Hey, chill man… take it easy.”

Now what is so special about the interplay between your sympathetic and parasympathetic nervous system when you have sex is that they operate together.

Usually the two of them work like an either/or switch. It’s either the one or the other. But when you have sex, that’s the rare exception; that’s when both systems are operating simultaneously.

It just heats up more until you reach the point of no return. That’s when your brain sends signals to your sympathetic nervous system (the soldier) and orders it to get ready to ejaculate.

Now you’ve gone through all of this, and maybe you have this question on your mind…

How’s all that going to help you last longer?

Well, think about it.

If you want to maintain an erection, which of the two nervous systems should be the dominant one while you’re having sex? The sympathetic (soldier) or parasympathetic (stoner)?

Yes, the “stoner” system. Because that’s when your blood vessels are relaxed and your penis is hard.

But how do you control that?

How can you make sure you keep the parasympathetic nervous system in charge when having sex?

Well, that’s what my How To Last Longer in Bed is all about.

Previous post: How Do I Last Longer in Bed?